There are a number of sites of interest close to Creetown.

On Cambret Moor – before the radio masts, just off the old Military Road between Creetown and Gatehouse of Fleet, near Garrocher Christmas Tree farm; The Glenquicken Stone Circle can be found on the right (from Creetown) and across private land in the second field – after the Christmas tree plantation and just beyond Englishman’s Burn. The Circle is made up of 28 outer stones (probably 29 once) and a central tall stone weighing around 4 tons and standing nearly 6 foot high. It is set in a beautiful location and well worth a visit (please respect the landowners property and be sure to close gates).

Cairnholy Chambered Cairns 1 and 2 are easily reached from the A75 road and are well signposted. They are cared for by Historic Scotland

The two cairns of Cairn Holy are an impressive survival, particularly Cairnholy I with its concave façade of tall pillar stones. Their landscape position is equally impressive, situated on a hill offering fine views over Wigtown Bay. Both were built in the 4th millennium BC. They are known as Clyde Cairns, a type of tomb characteristic of southwest Scotland.

Both tombs are now open to the sky – their covering stones were robbed long ago to build field dykes. Cairn Holy I is the more elaborate of the two, while Cairn Holy II is said to be the tomb of the mythical Scottish king Galdus. 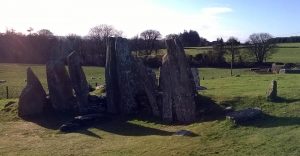 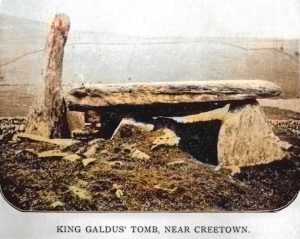 Nearby to Cairnholy, Dirk Hatterick’s Cave – Or Meg Merrilees.  A fictional site in Sir Walter Scott’s Novel, Guy Mannering. A tale of smuggling with more than a hint of truth about it. This cave is on a rocky beach at the Heughs of Barholm, accessed through ravenshall wood from a lay bay on the A75. There are knotted ropes to aid the descent down a very steep bank, so not for the faint hearted. 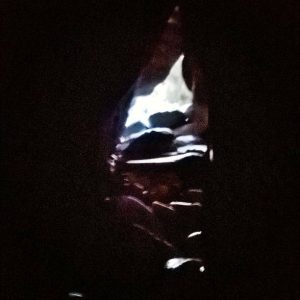 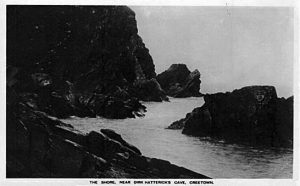 Heading from Creetown to Gatehouse Station on the back road passing Creetown Primary School, there are a couple of bridges, over a burn and over the old railway line. The second bridge with black and white painted Granite blocks (alerting drivers to the tight S bend) has an engraved depiction of a body in a Coffin and is inscribed ‘Hitler 15.8.40’. This was said to have been the work of an Italian Prisoner of War working on the roads. You can find the inscription on top of the wall to the right side leaving Creetown. 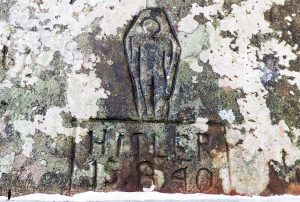 Engraved on Wall by Italian POW 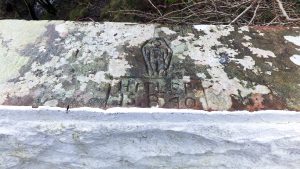 Inscription on Bridge over Creetown Railway

April, May
Every day apart from Wednesday and Saturday

Sept – Mid Oct
Every day apart from Wednesday and Saturdays

On Scottish Public Weekends we may open on Saturdays

In order to maintain and run the museum we do have a small admission charge:

Tickets may be used for repeat visits in the seven day period directly following purchase.